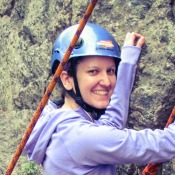 Being diagnosed with a rare form of Non-Hodgkins Lymphoma a week before I turned 21 was like a punch to the gut. Instead of planning a party with my friends, I was thrown into the middle of biopsies, chemo, surgeries, picc lines and learning medical jargon I never knew existed. It wasn’t until just prior to my last round of chemo that my oncology nurse introduced me to First Descents. I was a park ranger before I got sick and loved being outdoors. Whether it was hiking, camping, or canoeing; I have always felt most comfortable in nature. I went online and read more about FD and what it entailed. My boyfriend (now fiancé) had to go Turkey for work for a month and it felt like a good time to go. I put in my application, was accepted shortly after and was on my way to my first ever cancer camp. I wasn’t sure what to expect when I got there. Part of me felt like it was going to be sitting around the campfire talking about how much cancer sucks and being treated like we were “different”. My expectations were far from reality. We were all different, but only in the fact that we didn’t let our disease hold us back. I left camp that week feeling both physically and mentally stronger.

That feeling eventually faded when doctors’ appointments, scans, tests, and medicines once again took control of my life. The side effects from 16 rounds of chemo were taking its toll on my body physically, while mentally I fell into a state of depression. 2 years after my first experience with First Descents, I felt the need to go back. I longed to be around people who knew what I was going through. I wanted the adventure back in my life. I applied for FD2 and ended up being selected for the same location I did FD1, Estes Park, Colorado. A couple months prior to camp, I was in the hospital fighting a massive infection and lost a lot of my muscle mass and weight I couldn’t afford to lose. I left for camp still questioning whether I would be able to climb yet alone stay at the same pace as the other survivors. That all went away when I met up with the others at the airport and realized it didn’t matter how fast I climbed or how much it hurt. What mattered most was that I was with other people who faced the same challenges that I did. I think the best part was when I was climbing routes from FD1 that I would have never tried before. I was doing my best and felt like I was on top of the world. That quickly changed when we were on our final climb. I was feeling defeated on part of the rock and started bawling my eyes out. The others in my group were cheering me on but I wanted so badly just to give up. Suddenly, it just happened. The tears kept falling but my arms started moving and I was pulling myself up until I reached our next anchor. I just laughed at myself because here I was 450ft up a rock with only a rope holding me in crying because I thought I couldn’t do it. How many other people can say that they went rock climbing in the Rocky Mountains after going through a trauma like cancer? I looked around and saw another girl who had 2 hip replacements just months before camp. Another who was missing half of her foot and still managed to climb without giving up. Being around those same people helped me to realize that it’s ok to get frustrated but you just have to keep trying. It’s not always easy but it is rewarding in the end. 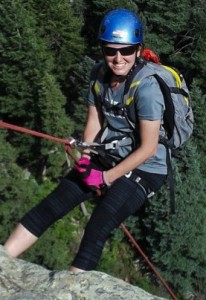 Without attending camp at First Descents, I wouldn’t be who I am today. Cancer has been one of the worst experiences of my life and I will always be haunted with the scars that came with it, but those scars now tell a story of who I am and what I have been through. Whenever I am feeling down, I go back to my memories at camp and think about how much positive has come out of being sick instead of dwelling on the negative. Going to camp has brought out the adventure in me that I thought cancer took away for good.